My Four Seasons is a testimony of life. A personal diary transformed into a profound but also fun lecture about how to face an illness with a positive mind; describing how the family and the friends play the most important role in recovery. Having an illness doesn’t mean we are ill… this is the most definite message this book leaves us with. It’s a message of hope and pragmatism about how to cope with difficult moments in our life, which appear suddenly. Those typical moments when we ask ourselves: “Why me?” instead of: “Now what?”… What constructive learning can we extract from every experience? 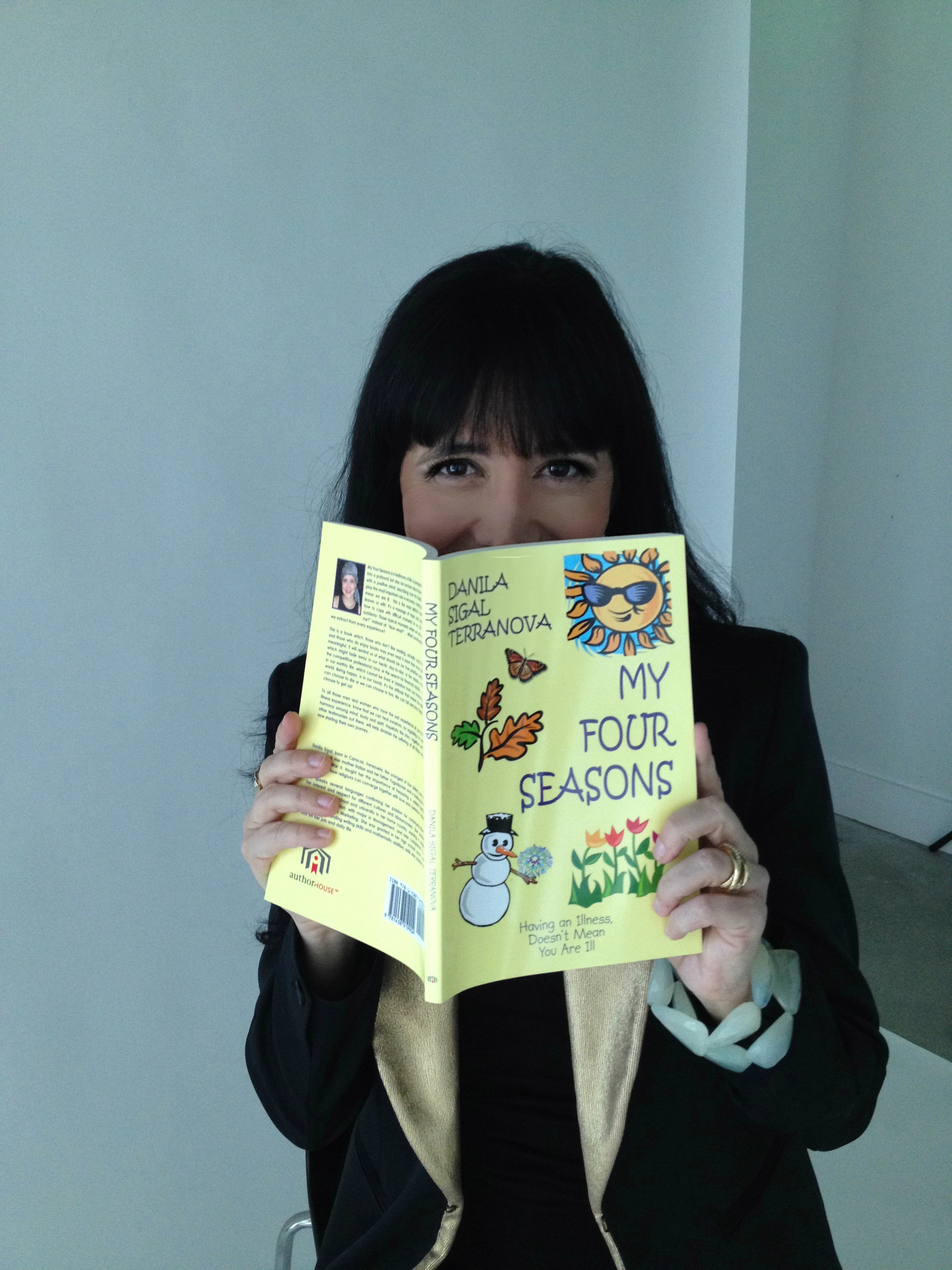 This is a book, which, those who don’t like reading, actually read it in “one shot”, and those who do enjoy books may even read it more than once. Refreshing and meaningful, it will bring memories of what is a priority in life and the values that fade away in our hectic day-to-day, in the middle of traffic, during the competitive professional race, in the search for financial stability… all valid elements in our earthly life, but which cannot be lived in isolation from our internal and spiritual world. Being happy is in our hands; it’s the attitude that makes the difference. We can choose to surrender to death, or we can choose to live. We can fall and stay there, or we can choose to get up!
To all those men and women who have the sad experience of going through an illness experience, know that we can heal ourselves, by regaining the balance and harmony among mind, body and spirit. Hopefully this story, together with so many other testimonies out there, will help diminish the suffering of all those who are just now starting their own journey.

God chooses what we go through. We choose how we go through it.
Character cannot be developed in ease and quiet. Only through experience of trial and suffering can the soul be strengthened, vision cleared, ambition inspired and success achieved – Helen Keller
Courage is resistance to fear, mastery of fear—not absence of fear – Mark Twain
Yesterday is history. Tomorrow is a mystery. Today is a gift, that’s why they call it the present – Eleanor Roosevelt

Just a couple of months ago, while in a meeting in one of the Boards on which I serve in the US, I related, in my own words, the story of Danila, as an example of how to deal with adversity and obstacles in life with ultimate courage and character, everlasting optimism, tenacity and, above all, unquestionable resilience and determination to win.

It was then quite moving to me that, by coincidences of life, a few weeks later I received an e-mail from Danila asking if I would be willing to “write a few lines” about her and her book, to be used as foreword in the edition about to go to press.

I was deeply honored by her request, particularly since I am convinced she could have chosen as foreword any of the tens of eloquent and spontaneous letters she has received from family and friends along her journey, some of which she has included at the end of her book.

Having followed Danila’s journey, and having of course read her book, how could I decline such an invitation, even if I have never written for any book? Please understand that, after many years in P&G, I consider myself a pretty good business memo writer. But, business writing has nothing to do with story or book writing, even if it is only a few lines as foreword. Nevertheless, I gladly accepted and here I go.

Contrary to most of my colleagues at P&G, Danila does have a “gift” for writing. Her talent allows her to relate her profound story, her “journey” as she calls it, using simple, everyday language, yet so deep and full of emotions, both joyful and sad. Her use of the “four seasons” to set and describe the various characters in her life is so creative it makes you feel as if you were going along in the journey with her.

I have known Danila pretty much since she joined P&G, although at the beginning a bit at a distance. That is part of the P&G system. We, older and more senior folks, rely on the younger managers to be closer to the new talent entering the company. As years went by she developed into a well rounded and very capable manager with lots of potential for growth. And so, over the years, I got to know Danila a lot better and appreciate her as the great human being she is. I got even closer to the family as for example Ramon, her husband, to whom I have become a career coach and mentor in his development outside P&G. They do make a great couple and have a beautiful family.

Everyone who knows Danila will describe her as a very smart and intelligent lady, tenacious and determined to move forward, always ready to help others, always with a smile on her face. In sum, she is a super human being.

So, how could someone so young and bright, with so many attributes and doing so much good to all those around her, all of a sudden be faced with such adversity and have to endure so much suffering? It is not fair! Any small portion of what she has gone through would be more than enough to send us into a spin of depression.

But, that is where the real Danila appears. The one perhaps not even she knew existed. The one that not only faces her illness with strength, courage, tenacity, optimism and determination to move forward, but moreover, and this is where she catches us “off-guard” as we are not expecting it, she actually turns her tough experience into a positive journey, draws lessons to help others under similar circumstances and even reminds all of us of how beautiful life is and how we should live every moment to the fullest. This entire reflection, she now puts in our hands in her book My Four Seasons… quite a story from quite a woman!

As I said, I am proud to know Danila and honored to have been given the opportunity to write these few lines, even if in the end it still reads as a business note.

With great pleasure I accepted Danila Sigal’s invitation to write the prologue of her book: My Four Seasons. It’s her personal diary where she shares her origins and endeavors with her family and friends, but which she then had to complete with the description of her life’s most difficult moments, expressed in a profound catharsis.

I met Danila Sigal in the year 2006 and shared with her and her inseparable sisters many hours of intense reflections about her experience with the illness that surprisingly appeared.

The Four Seasons, now isn’t limited to being an immortal musical masterpiece from Vivaldi, but rather, upon suggestion from the author, now accompanies the reading of this book to make the whole experience an indescribable harmonious sensation that extends beyond the senses.

With the sensibility of a poet, Danila uses incredible metaphors to relate the four seasons with the personality and profile of the people important to her surrounding. She associates them with summer, winter and spring, but reserves autumn to identify herself.

The author describes with magical beauty and effervescent style the anecdotes of her life, a journey where the reader will submerge as a trip companion, almost present in the event itself… experience which by the way, presents her high level of spiritual consciousness and Christian faith.

The overflowing joy of the first three chapters is followed by the description of her unexpected diagnosis of cancer, and the ordeal that accompany the medical procedures that are offered as treatment for this serious disease. She faced with great courage all the torment she had to live, always with the spontaneous positive attitude that has characterized her since being a child. As such, within the typical dramatics that surround all illnesses, she lives her daily life as if nothing were happening.

Between situations of profound sadness, wisely entwined with a colloquial sparkle, this book represents an invaluable treasure. “Having an illness doesn’t mean you are ill”; this is how Danila directs us to understand that diseases are our friends; that they bring us closer to the source of our creation and explains that despite their presence, we can discover a purpose for our existence.

Danila, you conquered the code to simplicity and unconditional love in your life, that is the basis to achieve inner peace. You are happy with everything and despite everything. In that setting is that God is guiding your thoughts and all the moments of your life. Because of this, He is present in each page of My Four Seasons, to fill with joy those who have the fortune of reading and sharing this extraordinary story. 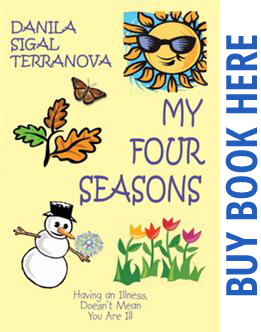 Login to Danila Sigal
Reset Password
Enter the username or e-mail you used in your profile. A password reset link will be sent to you by email.